Writing Tips from YALLWEST: My top takeaways from a galaxy of stellar writers at a most amazing YA festival


After living inside the deep, dark revision cave for many months, I emerged into the sunlight, packed my bags and made the six-hour drive from Phoenix to Santa Monica for #YALLWEST. For those as in-the-dark as I was, #YALLWEST is a mind-blowing young adult literature festival, created by NYT bestselling authors, Melissa de la Cruz and Margaret Stohl. It attracts a host of top-name and debuting young adult writers who give panel presentations on a huge variety of topics and also sign books for fans. In addition, there are ARC and swag giveaways galore, as well as opportunities to meet and make connections with YA readers and writers. I focused on attending panels, seizing the opportunity to listen to some of my favorite authors share their insights on YA literature and writing YA. Here are some of my takeaways:

On writing “the truth of characters”:
Rainbow Rowell (Fangirl, Eleanor and Park) starts with characters, since characters are what interest her. She loves Buffy the Vampire Slayer for the characters but can’t follow the plot.
Kiersten White (Paranormalcy) shared that her characters (both villains and heroes) are drawn from her own feelings.
Gwenda Bond (Lois Lane: Fallout) told the audience that, “Every person has a universe inside them,” and that characters should reflect that.
Jennifer Niven (All the Bright Places) advised writers to, “Live in the story.”
Robin Benway (Emmy and Oliver) uses, “research and empathy.”
Heather Demetrios (I’ll Meet You There) told writers, “Put yourself in that person’s position,” using “method writing.”
Nicola Yoon (Everything, Everything) believes that, “Experiences that are widely different have a common thread.”

On plotting vs. pantsing:
Rainbow Rowell shared that she writes with a vague idea and no intention, and never even worries about whether her work is YA or adult; she just writes it. Ransom Riggs (Miss Peregrine’s Home for Peculiar Children) expressed that writing is often like “a journey using a map drawn by an idiot.” Other pansters include Simone Elkeles (Perfect Chemistry series) and Evelyn Skye (The Crown’s Game).
Gwenda Bond explained that she tells the story to herself, and has a loose outline so that she doesn’t lose “the magic of discovery,” while Leigh Bardugo (The Grisha Trilogy) uses a twelve beat story outline. 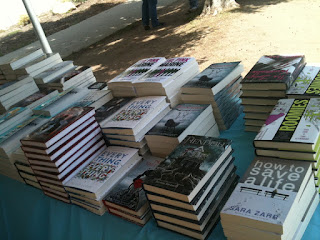 On the value of YA literature:
Jennifer Niven expressed how books “open other worlds and make us feel that we’re not alone.” This sentiment was echoed over and over by authors throughout the festival. Newbery award-winner, Matt de la Pena and Coretta Scott King award-winner, Jason Reynolds stressed the importance of giving those who feel like outsiders, “a home in literature.”

General writing advice:
Sara Zarr (The Lucy Variations): “Read widely. Pay attention.”
Jessi Kirby (Things We Know by Heart): “Don’t be afraid to write crappy stuff.”
Adi Alsaid (Let’s Get Lost): “Make time for writing.”
Siobhan Vivian (The Last Boy and Girl in the World): “Finish a first draft.”
Jason Reynolds: “Know all the rules and then break every single rule.”
Matt de la Pena: “Talk less and listen more. The answers are all around you.”
Kiersten White: “At the end of a writing period, write three lines of the next chapter.”
Libba Bray (The Gemma Doyle Trilogy): “Learn to be brave.”
Evelyn Skye: “You’re telling your story.”
Jennifer Niven: “You have to feel the emotion if you want the reader to feel it.”
Adi Alsaid: “Originality is over-rated; just be personal.”

On those days when you feel like a failure and everything you write is crap:
Matt de la Pena and Jason Reynolds discussed how success can be as paralyzing as failure.
Leigh Bardugo shared that what’s important is the way you deal with those days.
Heather Demetrios talked about how sometimes changing one’s perspective makes all the difference. She also stressed the importance of “taking care of yourself creatively.”
Stephanie Kuehn (Charm and Strange) advises writers to read (or watch) something they find compelling that makes them feel inspired rather than defeated.
Jennifer Niven shared her mom’s wisdom: “There’s only one Jennifer and only she can write what she writes.” And also, “There’s room for all of us.”
Robin Benway told writers, “Let it suck! You can go back and fix it.”
Nicola Yoon advises, “It’s part of the process. Trust that you can get past it.”

On writing love and romance:
One of my favorite moments of the weekend came when Nicola Yoon passionately defended novels that focus on love and romance against those who dismiss them or regard them as inferior, saying, “I dare anyone to say that love isn’t important; it’s the thing that makes the world go around. Even the critics who say those silly things are obsessed with it.”

And my number one takeaway: Go to YALLWEST next year!! It’s like an all-you-can-eat smorgasbord of fabulous YA authors and books. Don’t miss it!

Many thanks to my fellow Pitch Wars ’14 alums, Traci Chee (The Reader) and Tara Sim (Timekeeper) for waking me up to the fact that YALLWEST was taking place and for introducing me to a fun group of writers who let me tag along and showed me the joys of free ARCs! Thanks also to Pitch Wars mentor Jennifer Hawkins who, sadly, was unable to make use of her VIP pass, but, happily, sent it to me. Most of all, HUGE thanks to #YALLWEST organizers, Melissa de la Cruz and Margaret Stohl, and to all the authors and the behind-the-scenes people who made this amazing event happen.

Posted by susangrayfoster at 8:02 PM