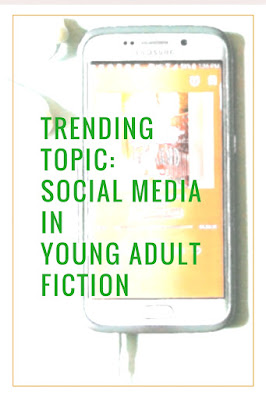 Young adults are living their lives online. Sure, as an adult, you're probably also addicted to checking updates to your Facebook groups, Twitter feeds, Pinterest links, Snapchats, or Linked In requests.

Like you, I can quit any time. I swear.

It's inevitable that this online reality has influenced our fiction. As writers, we can't underestimate how handed-down tablets and smart phones have influenced the younger generations. Some have skipped email entirely to go straight into online profiles on user-heavy social media sites.

How can writers effectively use social media in young adult books?

I've seen a trend in pitch contests with YA written in a near-past decade (1980s or 1990s), with some writers expressing they want to capture a simpler era before smart phones and wide use of the Internet. While it's up to each writer to determine his or her own story, online life IS reality--and a great aspect to use for storytelling!

Even if not every teenager has a smart phone or a tablet or even a home computer, the very fact of not having access to those things can be story fodder. The 2016 debut The Serpent King by Jeff Zentner explores the lives of three friends with vastly different socio-economic backgrounds. The story is not about social media, but how each character has access to it shapes the each of their stories.

Build a story conflict around the use of social media.

Stories thrive on conflict, and there's plenty of opportunity to mine from social media. Anna Breslaw's 2016 YA debut Scarlett Epstein Hates it Here involves online fan fiction which Scarlett, in efforts to win over her online friends, embellishes her fic with the lives of real life people. When those worlds collide, Scarlett has a lot to answer for. The conflict of the story could not exist without the contrast of her online persona versus her in-person reality.

In the upcoming 2016 release Little Black Dresses, Little White Lies by Laura Stampler, a high school blogger stretches the truth to win a New York City summer internship at a teen magazine. When an article in her advice column goes viral, she's confronted with online harrassment as well as fame. Telling the truth about her lie to win the internship risks her online popularity and new and old friendships.

Have fun with it.

It's up to you whether to use the names of real social media applications or to make up your own. Laura Stampler had the same doubts. "I worried — would referencing Instagram date my book? But having Harper (my protagonist) Instagram yummy dinners or Facebook stalk her crush or tweet her articles felt really organic, so I just went with it. If anything, I hope my book feels like a snapshot in time of what it would be like to be an intern at a magazine during the wild west of online media."

Moving beyond young adult characters simply using social media, consider the larger life implications. The TV show Catfish is a great example of how people's actual lives and what they present online can vastly differ. Why would a teen lie about themselves online? What do they aim to gain? What are they avoiding? Can you strengthen your story's stakes by using social media to further isolate or expose a character's problem?

Stephsco
I'm Stephanie Scott and I write Young Adult fiction about teens who put their passions first. My debut ALTERATIONS releases 12/6/16 by Bloomsbury Spark. I enjoy dance fitness, cat memes, and Pinterest is driving me broke. I'm represented by Sarah LaPolla, Bradford Lit. Find me on twitter and Instagram at @StephScottYA