How to Write a First Line that Hooks 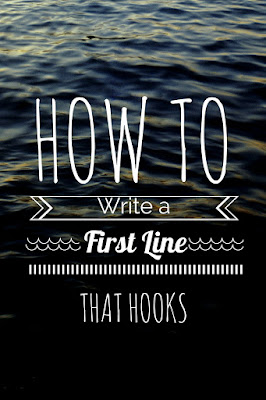 Not every book has a great first line. In fact, many great books have ordinary, rather lackluster first lines, and still manage okay.

In a sea of unpublished writers clamoring to be read and recognized, you could chance it with an ordinary sentence that gets readers from point A to point B. Hope for the best.

No! I’m here to tell you, this is NOT acceptable! Your first page is the gateway into your story. Your first line has the potential to be the showcase for that first page, for your book, and for YOU as the author. Why not strive to make your first line great?


Let’s take a look at a few first lines and what they do well.

This is the first line from Pitch Wars founder Brenda Drake’s Thief of Lies: Library Jumpers:

Only God and vendors at Haymarket wake up early on Saturday mornings.

First, we the reader are given information about the world. Only two entities wake up early, and the conclusion is that one of these is not our narrator. We immediately get a feel for what this character believes—he or she is not one to wake up early on a weekend. That’s a small instance of author voice. It’s not simply stating information, but rather information with a point-of-view. There is also mention of Haymarket, capitalized. What is this market? Comparing this Haymarket to God is noteworthy. Are the two equated in the character’s eyes? This opening is compelling: we want to find out more about the Haymarket, it showcases author voice, and prompts us to ponder about the story. All that in one line!

What Brenda could have written was:

She woke up angrily noting that the only people who get up this early are God and the market that sells to the people of Boston which opens by seven a.m. on Saturdays.

Hopefully you get this is written intentionally poorly. What’s missing here? We don’t know who “she” is yet, so starting with an unnamed pronoun is a little confusing. There is too much information crammed in here. The explanation of the market’s hours might be factual, but it’s not very interesting, even if the city name is helpfully added. The line is not compelling because it’s overly wordy, and though we know she wakes up “angrily,” the more unique sense of author voice is gone.

This next line is from a recent release by a Pitch Wars mentor: Chasing Crazy by Kelly Siskind:

After much deliberation, I’ve determined there are three official have-to-pee stages.


Right away, we have voice. A tone is set for the story: this character is self-aware, funny, and is telling us the story directly (first person). It’s an intentionally strong point of view. The line is compelling—don’t you want to know the three official stages for having to pee? It creates a story question: where is this character where she is in desperate need to use a bathroom? I definitely want to read on! (And I have—her character’s situation gets SO much worse!)


Our next line is from another Pitch Wars mentor’s debut book, This is Where it Ends by Marieke Nijkamp:

10:01 – 10:02 A.M.
CLAIRE
The starter gun shatters the silence, releasing the runners from their blocks.

On the surface, this line may seem simple. The phrasing is direct, and there isn’t much flare to this. I included the time stamp and point-of-view header because these are integral to the pacing and storytelling of the book. The reader is being shown that the timeline is key, down to one minute of time. This book is about a school shooting. Opening with a gun and a shot which is not a handgun used for violence, but an approved piece of equipment used for sports, is compelling and a bit of a twist. The story question prompted is how does the starting gun and the runners fit with the rest of the story? Why is this one minute crucial to what happens later with the real gun?


Already, I’ve connected that this first line is important, which is another reason to not cast a throw-away line up front. Readers may place more value on those first words and glean expectations from them. If you start with an image or a theme that isn’t essential to the book, you not only lose the opportunity to showcase a compelling, voice-filled line, but you could potentially confuse readers or steer them in the wrong direction. Being thoughtful about the first line is as important as infusing it with voice or a reason to turn the page.

Hopefully, these points provide a starting point toward crafting a dynamic first line. Not every book has a great first line, but shouldn’t yours?

What do you think makes a great first line?

Email ThisBlogThis!Share to TwitterShare to FacebookShare to Pinterest
Labels: Chasing Crazy, First Lines, Hooks, pitch wars, Thief of Lies, This is Where it Ends

Stephsco
I'm Stephanie Scott and I write Young Adult fiction about teens who put their passions first. My debut ALTERATIONS releases 12/6/16 by Bloomsbury Spark. I enjoy dance fitness, cat memes, and Pinterest is driving me broke. I'm represented by Sarah LaPolla, Bradford Lit. Find me on twitter and Instagram at @StephScottYA